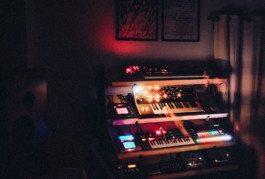 »When I produce music it’s an intimate process, and I nearly never think about a club situation or how people could react on the dance floor«.

Listening to Markus Suckut making this rather brave statement, bearing in mind the kind of response he gets from his audience, the dancers – the ones inhabiting the aforementioned floor, you could think he is very lucky. Or, you could simply say he is very talented.

For someone who does not necessarily compose with the audience in mind when in the studio, it is a very pleasant side effect how appreciated his work is in the actual clubs – his work is by instinct extremely groove–focused (something he gets constant recognition and accolade for). There is a continual hypnotic locked channel in Suckut’s reduced techno. His elements might be sparse but they are highly effective, the tracks are denied excess but the funk is still there, clearly visible. Whether he leans towards more dubby spheres or letting breakbeat be the backbone structure in the production, the swinging groove – his trademark – is always present.

German born and based Markus has been producing and DJing for over a decade and a half. As a DJ he likes to take on the role of a storyteller, preferring the longer variety of a set if he can choose. His career is built on excitement and playfulness, both as a DJ and producer, something that has paid off into becoming a considerable back catalogue. With his first production being released in 2009, a discography of over 30 records is now linked to his name – including two full length solo albums: »DNA« (Figure) and »Resist« (EXILE) released in 2013 and 2017 respectively.

Suckut also runs two imprints: SCKT founded in 2012, which he brought back to life in 2016 after a two–year hiatus, and the more recent Tales Of The Machines that he started in the same year. The latter one proclaims its manifesto being to release more extemporary live tapings from jamming sessions in the studio, simply letting the machines have more of a »final say« in the process.


For booking inquiruies please get in touch with me.